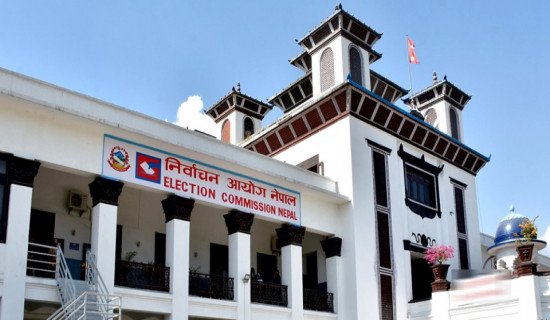 Kathmandu, Aug. 9: The Election Commission (EC) has vowed to conduct the upcoming federal and provincial assembly polls in a free, fair and fearless manner while being economic and ensuring best possible participation of the voters.

During a progress review of election publicity and voters' education programme of the recently held local level election, the EC has come up with the idea of replicating the best practices of the past and implementing the feedback received earlier.

The EC has expressed its concerns to the poor turnout among the urban and educated people compared to those rural and uneducated voters. In this regard, the EC has expected proactive role of the media.

On the occasion, Chief Election Commissioner Dinesh Kumar Thapaliya said EC's activities would be carried out giving equal treatment to all as per the generally accepted principles of the elections while calling for support from all sides to complete the election in a free, fair and credible manner.

The Chief Election Commissioner made it clear that the EC was for establishing cooperation and understanding with all responsible bodies of the state including the media and argued that the role of state-owned media was crucial in the election publicity campaign.

Praising the role of public media including that of Rastriya Samachar Samiti (RSS), Gorkhapatra Sansthan, Radio Nepal, Thapaliya expressed the confidence to receive voluntary support from the responsible media in regard to the upcoming polls.

Chief of Advertisement Board Laxman Humagain, Chief Reporter of Gorkhapatra Daily Kedar Bhattarai and others also expressed their views for giving best possible coverage to the election activities. (RSS)