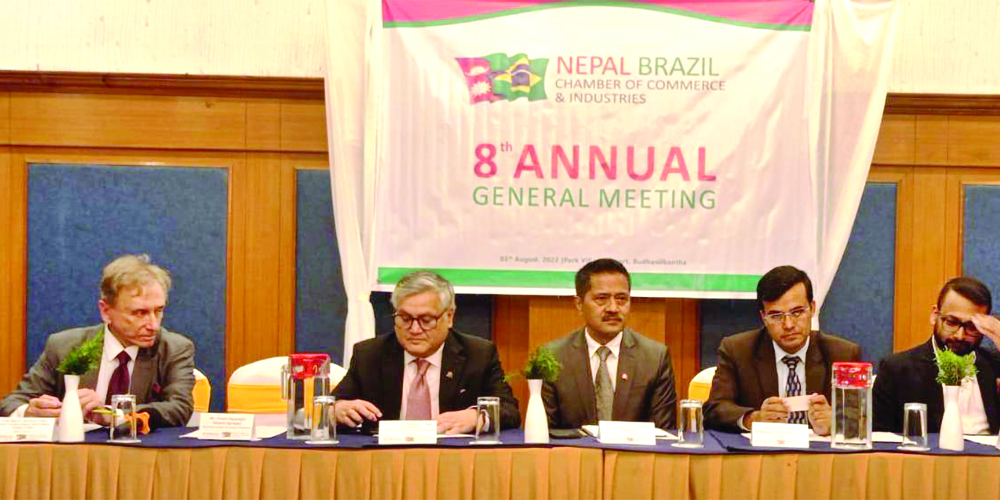 Kathmandu, Aug 7: Businessman Akhil Kumar Chapagain has been re-elected as the president of the Nepal-Brazil Chamber of Commerce and Industries (NBCCI).

The eighth annual general meeting of the association held in the capital on Saturday elected a 14-member executive committee unopposed under the chairmanship of Chapagain.

Cheng Agarwal and Bikram Rai have been elected as the vice presidents of the association, Umesh Rayamajhi as the general secretary, Jyotsana Shrestha as the secretary, and Niraj Timalsina as the treasurer.

In the program, President Chapagain said that the association is playing an effective role in enhancing bilateral trade and expanding economic relations between Nepal and Brazil.

According to him, in the last fiscal year, goods worth about USD 427,000 were exported from Nepal to Brazil, while goods and services worth USD 61 million were imported from Brazil.

"We are currently in a huge trade deficit with Brazil," said Chapagain, "we have seen a great potential for exports from Nepal to Brazil and our program will focus on increasing exports in the future."

He said that Nepal is currently exporting goods such as carpets and garments along with handicrafts and it will be increased in the coming days.

Under the leadership of the association, Nepali businessmen have completed two business trips to Brazil, and he expressed his commitment to expanding business relations in the coming days.

In the program, former Minister for Industry, Commerce, and Supplies Sunil Bahadur Thapa said that expanding relations with Brazil, which is progressing strongly in economic development, will help Nepal's economic advancement.

Thapa pointed out that Nepal can benefit by bringing in capital and technology from Brazil in the agricultural and mining sector and emphasized expanding relations with one of the most powerful countries in the world economy.

Nirmal Raj Kafle, the Nepalese ambassador to Brazil, committed to focusing on investment promotion and marketing of Nepali goods during his tenure.

He said that initiatives will be taken to increase tourists from Brazil to Nepal.