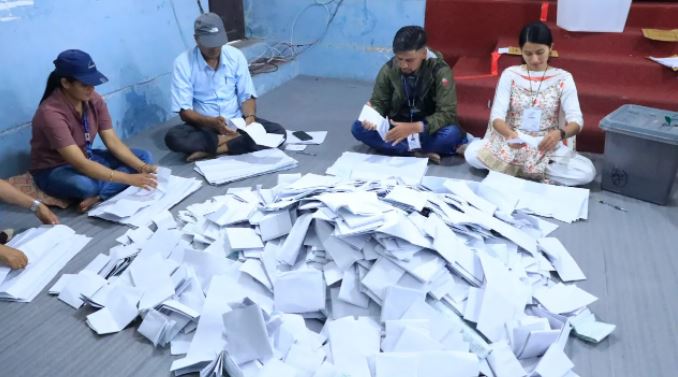 By Our Correspondent Achham, May 16: Vote counting in two polling centres of Achham district will begin on Monday.

Vote counting in the poling centres was suspended due to a dispute between political parties. After the polling was disturbed, Election Commission had instructed to cancel the poll and conduct it again on a suitable date.

The commission asked to make arrangements for re-polling as per the Local Level Election Act. During the polling on Friday, clashes broke out between the two parties at the polling stations in both the places.

Three persons were injured in a clash between the Congress-Socialist alliance and the CPN-UML at a polling station in Babla on Friday morning.

Before the clash, only 343 votes had been cast in Babla's A and B polling stations. There are 1,969 voters in the polling station. Only after the re-election will the counting of votes take place at those two local levels.

Similarly, polling was suspended at A and B polling stations in Layanti from 12 noon due to a clash between independent candidates and Nepali Congress supporters. Three people were injured in the clash and police had to fire in the air to take the situation under control.

Meanwhile, re-election is scheduled to be held on May 16 at Khandadevi Rural Municipality-1 of Ramechhap.

Dr. Diwakar Bhatta, election officer said there was a dispute between the political parties at the polling station during the voting.

The voting process was postponed due to disagreement between the political parties.