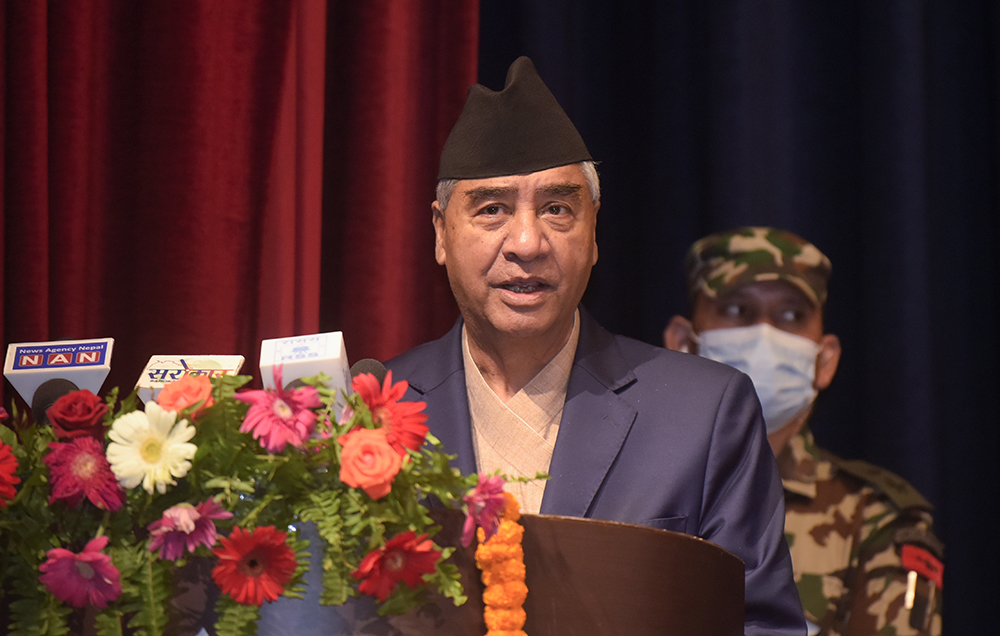 Kathmandu, Aug. 15: Prime Minister Sher Bahadur Deuba has pressed an idea of promoting the culture of exploring special aspects of arts and cultures of each caste and community as well as protecting, recognising and archiving them as intellectual properties.

While inaugurating the 37th meeting of the Academic Assembly of Nepal Academy here today, the head of the government described art, culture, literature, philosophy and sociology as the national treasures featuring the distinct identity of the nation.

The Prime Minister who is also the Patron of Nepal Academy said just physical achievement and progress of any nation would not suffice to indicate the development status of that nation.

He insisted on the need of protecting and promoting the country's art, culture, history, philosophy and literature to promote its international identity and recognition.

The Prime Minister on the occasion applauded the role and contribution of Nepal Academy in enhancing the art, culture and literature of the nation at home and abroad, and also thanked the NA management for its decision to cooperate and collaborate with academic bodies in neighbouring countries in literary and academic sectors and for cultural exchanges. He pledged government support to continue such efforts in the future, too.

He also expressed his happiness over the Academy's preparations to launch a publication 'Madhesh Province Darpan' highlighting on the identity of the Madhesh and to launch a museum in commemoration of the late Mahakavi Laxmi Prasad Devkota. He assured of help and cooperation on behalf of the government towards that end.

On this occasion, the Prime Minister launched the Academy's 'e-book app'.

Minister for Culture, Tourism and Civil Aviation Jeevan Ram Shrestha commended the role of the Academy for providing academic leadership to all litterateurs in the country and further promoting Nepal's pride, famous litterateurs and their works in the international arena.

The Minister viewed that the Academy had carried out 'exemplary' works by internationally promoting Nepali literature and cultures by building and maintaining diplomatic relations with South Asian Region's countries and some other countries outside of the Region.

Similarly, Academy's chancellor Ganga Prasad Uprety urged the government to consider increasing the budget for the Academy to implement various important projects in the literature sector.

Nepal Academy was established on June 22, 1957, with the objectives of developing and promoting Nepali literature, culture, art and science. Various departments were established in the Academy to study Nepal's language, literature and culture to conduct research in the field of social sciences and philosophy as well as to honour the nation's academicians and authors to encourage and involve people in creative and expressive works.