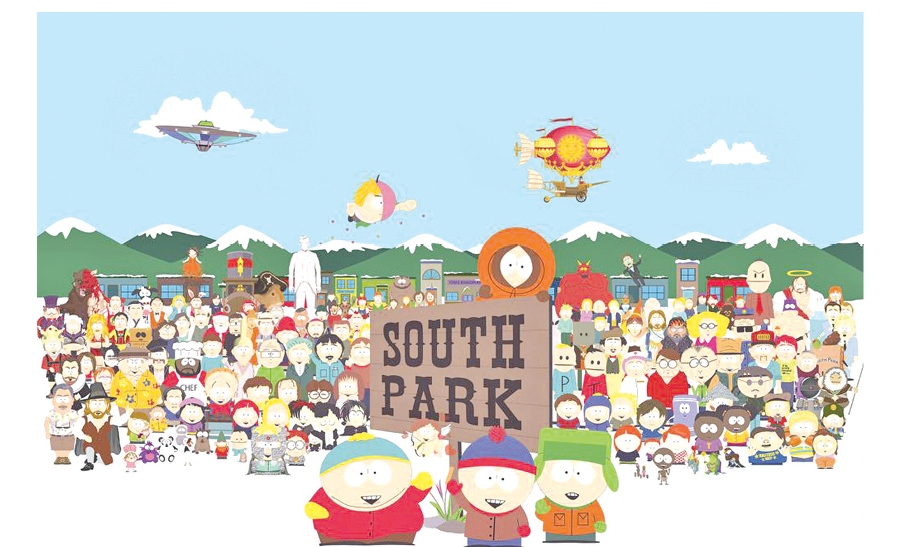 New York, Aug 14 : Reaching the age of 25 is usually a sign of hitting adulthood, a signal to put away all childish things. Not for “South Park” and stars Stan, Kyle, Kenny and Cartman.

The Comedy Central staple about four bratty, perpetually bundled-up youngsters in an unhinged Colorado cartoon town celebrated its silver anniversary by trundling along, fueled by poo jokes and razor-sharp

Just some of its targets over the years include religions like Christianity, Islam, and Scientology as well as climate change deniers, cryptocurrencies, Phil Collins, Tiger Woods, smoking bans, “Game of Thrones” and pedophiles. One of its child stars used to die in every episode, violently.

“Some people are like, ‘Wow, I can’t believe they made fun of that because that’s such an important thing.’ And that’s exactly why we made fun of it,” says Trey Parker, who created the show with Matt Stone.

To celebrate the series’ 25th birthday, Parker and Stone have returned to Colorado with a concert filmed at Red Rocks Park and Amphitheatre near Denver, headlined by Primus and alternative rockers Ween. Rush members Geddy Lee and Alex Lifeson also stopped

The concert, which will debut Saturday on Comedy Central and hit Paramount+ on Sunday, will feature songs from the series’ history. Stone calls it “a celebration, a party and a retrospective.” It airs at the same hour and same day 25 years ago that “South

Since the Peabody Award-winning show’s first episode in 1997, Parker and Stone have blurred the boundary between good taste and bad, even more so than that other, long-living adult cartoon “The Simpsons.”

“South Park” had a cartoon of Jesse Jackson insisting on having his rear end kissed by Kyle’s dad to apologize for his use of a racial slur and depicted Jesus Christ defecating on former President George W. Bush and the

“As much as I love ‘The Simpsons’ and I think ‘The Simpsons’ is really important, I think ‘South Park’ has definitely done things that ‘The Simpsons’ haven’t,” says Dr. Jonathan Gray, a media and cultural studies professor at the University of Wisconsin-Madison, whose books include “Watching with The Simpsons: Television, Parody, and Intertextuality.”

One highlight was the three-episode 2007 arc that told the story of Imaginationland, a place where Gandalf, Charlie Brown, Count Chocula, and all the inventions of human imagination live.

When terrorists attacked Imaginationland, our pint-sized heroes had to set things right before the U.S. military nuked

Typically, each episode of the show culminates in a cut-the-crap, commonsense sort of moral — some version of “do the right thing” or let people make their own decisions.

Gray says Parker and Stone fit poorly in either the Democratic or Republic camps and places the pair on the political spectrum as “left-skewing libertarians.”

“They hate celebrities when celebrities try to tell us how to run our lives,” Gray says. “Some of their criticisms are ones that unite the left and the right. Like we all find celebrity culture vacuous.”

“South Park” is the series that gave us cultural touchstones like Cheesy Poofs, ManBearPig and Mr. Hankey, the Christmas poo. It gave us Professor Chaos and General Disarray and the sight of Cartman exacting revenge on a teenage bully by making him eat his own parents and then gleefully licking the tears from his face.

It has morphed into full-length movies like “South Park: Bigger, Longer & Uncut” — which snagged an Oscar nomination for best original song — and video games like “South Park: The Stick of Truth.” On Broadway, their musical about Mormons has been a hit since 2011.

The Parents Television Council, which hopes to restore “decency to the entertainment industry,” has frequently criticized the show, calling it “home for graphic sex and violence.” The show has confounded censors across the globe, and the show itself even launched a ″#CancelSouthPark” ad campaign, pretending that someone was trying to sanitize

Celebrating its 25th anniversary with a concert makes sense since music has been at the show’s heart. Some 100 songs have been used over the years, and “South Park: Bigger, Longer & Uncut” was itself a musical film. Parker and Stone think of themselves less as animators and more as members of a band.

Nepathya’s “Naina Taala”, a Dashain surprise for the fans