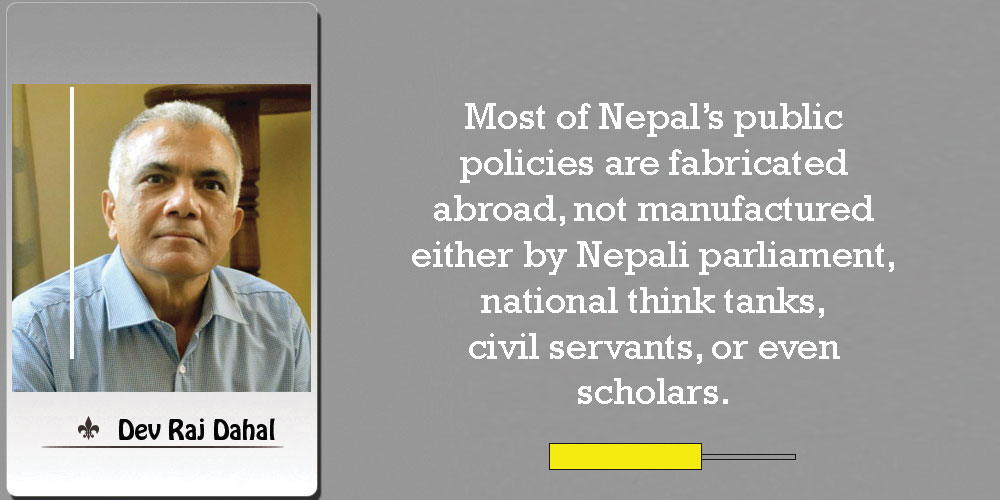 Nepal’s problem of politics is the lack of its autonomy from tribal, ethnic, social, economic and geopolitical passion. The nation’s constitution has clearly laid out the “autonomy” of politics for citizens. It is the only sphere that sets the equal institutional context for them to compete and realise rights, power, resources and identity beyond party manifesto, cliché, hierarchy, rhetoric, promises and kickbacks. The growing political awareness and sophistication of Nepalis have ended their fatalism, endowed many of them with the ability to think about politics not only in terms of what political leaders say but also in terms of what they do. Highly-spirited ones frequently question the language they use in the frame of rationalistic democratic ideals essential to fulfil their eros, create level playing field for internal competition and engage in optimising various interests in the golden mean.

The increasing politicisation of Nepalis by media exposure and political mobilisation has improved their cognitive and judgmental ability about the parameters of elections. As a result, they are wary of the polarisation of state institutions such as the police, the bureaucracy, public corporations and educational institutions along partisan and parochial lines which has reduced Nepali politics to social relations. It has fostered family-friendly, patronage and clientele politics in the nation. On the other hand, the big role of money in the recruitment of important positions of governance has also reduced the spirit of autonomy of politics to economic transactions, devoid of its very leitmotif — to serve the public and national interests.

The corporatist model of politics is value-free and interest-based, very often power-equation oriented, transactional and bargaining across various politically relevant forces for power-acquiring, election victory, distribution of important posts and even the formulation of electoral game for well-demonstrated future possibility. As a result, like in pre-modern times rajya satta (state power) is identified with the dominant parties, not legally independent of the establishment, created by both top leaders of ruling and opposition parties of various hues.

As Nepali politics has failed to stand above thulo manchhe, the privileged social, economic and political elite, bichaulias, (special interest groups) and free riders, it has not been able to fairly remain within constitutional bound and promote the delivery of public goods and services to ordinary citizens expected of even infant democracy. This lack of autonomy of politics, that is, raj (state) niti (policy) from the geopolitical interests and international development institutions can be easily attributed to the lack of confidence of Nepal leaders’ intellectual capacity to formulate context-sensitive public policies and escape the temptations to relent to extra-national forces without consulting native demos. They hardly find the sanctity of boundaries of the state defined with the convergence of the state, economy and citizenship.

Most of Nepal’s public policies are fabricated abroad, not manufactured either by Nepali parliament, national think tanks, civil servants, or even scholars. Similarly, the primacy of powerful interest groups and top party leaders in Nepali politics and their faith only in affno manchhe (cronyism), not ordinary citizens with motivation, talent and skill and its continuous retreat from the society have rendered the authority and capacity of politics less and less effective in governance while incubating informal rule where even corrupt, criminal and thieves of state are glamorised by partisan media. It has created image deficits as well as output legitimacy of the regime though elections can only partly supply input legitimacy. An intensifying weakness of Nepali state power hamstrung by partisan recruitment of all constitutional and key posts, impunity of the human rights violators and ugly political radicalisation of the society are increasingly putting politics in the area of status quo, privileges and authoritarian lines.

It is provoking the public disenchantment, rise of independent candidates in elections, party factionalism and social struggles of people for the expansion of freedom, justice and peace. All these processes are compounded by internal and external interest groups of Nepali polity. The heavy reliance of Nepali leaders for their survival on non-political territories, for example, involvement of the police and army in business and development works aside from security, law and order, reshuffle of civil servants in every regime change, extra-constitutional mode of political change and operation of a myriad of oppositions continue to spawn anti-democratic spiral. The autonomy of politics does not emerge in ideological extremisms but in the middle path.

The weak accountability of Nepali leadership to their power can be attributed to their wretched understanding of popular sovereignty as a check on their passion. Absence of civic virtues has increased the distance between the political leadership and ordinary citizens, mostly peasants and workers affirming the economic historian M. C. Regmi’s research, “The peasant, as the actual cultivator of land, is compelled to share the major proportion of his produce with parasitic groups who have no role in production and whose income from the product is not available for use as capital in increasing agricultural productivity. The involvement of leaders in non-political activity can be attributed to their divorced from both “public policy” manufacturing and fulfilling the essential “needs of people.”

The Nepali political leadership drawn mainly from the caste and ethnic groups, business, bureaucracy and feudal power structure is pre-rational in its attitude and orientation and, therefore, incapable of getting along with those outside their own caste, clan, client, and relatives and accept the ordinary people as citizens with equal choices, rights, opportunities and responsibilities. Continuity of the geriatric leadership structure of the Nepali politics even in the post-democratic phase suggests that the 'modern' leadership can never break its nostalgic grip on illiberal political culture of patronage, self-aggrandizement and deepest instinct of vengeance to restore social, gender and  intergenerational concern in Nepali politics.

The onset of network politics, informal governance, rather than constitutional equality, governs the life of under-classes of society. The ineffectiveness of modern political leadership in dealing with massive corruption, rent seeking, concentration of wealth and the problems of law and order in the nation reflect a rationality deficit in rule. The great educationist of our time Paulo Freire has said, in democracy, "the leaders must believe in the potentialities of the people, whom they cannot treat as mere objects of their own action; they must believe that the people are capable of participating in the pursuit of liberation." Yet, in Nepal lack of deliberative mode of decision making and problem resolution indicates a direction towards authoritarian mode of politics animus to democratisation at intra and inter-party levels.

There is a need to reduce the role of money in politics in Nepal and create a condition of political stability by reducing the artificial contradictions among the socially less inclusive characters of the political elite and their political parties in decision-making structures easing party leaders frequently change their loyalties from one political faction to another and migrating from one political constituencies to other without any sense of representation of people. This political class is deeply entangled in the culture of family-friendly politics, which hinders the prospects of social mobility of under-classes, democratic accountability and growth of a liberal civic culture which is tolerant and virtuous. Without strong countervailing public opinion, watchdog institutions, genuine civil society and independent courts, it is hard to enhance the autonomy of politics in the public life of Nepal.

For the notion of politics to be satisfactory, leaders should create the autonomy of a righteous political space for all Nepalis to socialise, aggregate the interest of people, articulate their legitimate needs and demands and resolve issues of their concern. Only in this space, Nepalis can exercise their democratic rights and freedoms as well as include a variety of perspectives to deliberate on vital questions and seek answers from their leaders.

Democratic politics involves the processes in the execution of public duties enshrined in the constitution. Therefore, the dharma (institutional duties) of politics is to serve the public and national interests. It is in this domain that Nepalis are motivated to question their leaders' accountability, remind them of their promises in the previous elections and the direction of national politics to the zeitgeist.

It is vital to keep the autonomy of politics and earn the legitimacy needed to make it the heart of raj dharma, the rights and duties of leaders to conduct statecraft. Politics is deeply public. It is shared equally by every citizen Nepali nation regardless of gender, wealth, class, caste position or political distinction. The essence of rajo guna, is not a vocation of deception. And, to the extent that it seems to be so in the nation now, it is only those subtle selfish interests of leaders who make it a foul game. Election is not only a leverage to acquire legitimacy of rule but also the circulation of leadership in political power and determination of public policies. It, therefore, requires an enlightened conscience of voters which only vigorous civic education can foster.

Nepal, sadly lacks vibrant public schools for educating about democracy and enabling people to become its stakeholders.  If politics exclusively serves the private interest and exhibits apathy towards others constituencies, but who do make up the larger public, it cannot become a matter of collective concern or, by implication, political. Democratic politics treasure a common ground for Nepalis of all hues to promote public good. Anti-public politics does not foster the autonomy of politics in Nepal.

Democratic politics intends to widen the public sphere as it is deliberative, participatory, public, inclusive, and transparent and bottom-up. The increasing emasculation of the autonomy of politics fosters individualism, exclusive interests, private purpose of leaders, non-public in orientation, and opaque in decision-making. Nepali public intellectuals must be engaged in educating the public, fostering attitudes and institutional mechanisms of integrity to sustain checks and balances of power and decentralised governance and increase the accountability and effectiveness of the leaders in their relationship with the citizenry.