Veteran Nepali Congress leader and legislator Pradip Giri stood out in a crowd of Nepali politicians as he won plaudits for being a well-read politician, a rare species in our society, who could have spoken at length about Western political thoughts and Eastern philosophy, besides delving deep into Marxism and other pertinent issues.

His popularity as an adroit orator went up whenever he addressed a gathering or political conference. Crowds of people and party workers, even from opposing political parties, listened to him intently while top-notch leaders paid close attention when he addressed the House of Representatives. Despite being a Congress party functionary, his eloquence on Marxism would surprise even a diehard communist.

A double Master's degree (in Economics and Philosophy) graduate from the reputed Jawaharlal Nehru University, Giri followed the Congress founder late BP Koirala from early student life, gaining insight into the legendry politician BP's life, his political acumen and working style. Due to his closeness to BP, he stuck to the latter's principles of nationalism, democracy and socialism and spent about four years in prison during his political struggle. Call it a quirk of fate that both Congress leaders - the late BP and Giri battled the same disease - throat cancer and succumbed to it after battling the disease.

Because of his prominence as a modest but thoughtful leader, who roamed around the places in simple khaddar attires (coarse cotton), he won hearts of villagers, voters and all those who preferred leading a modest lifestyle. This could be the reason people elected him to the federal parliament and Constituent Assembly for four times (2051, 2064 BS, 2070 BS and 2074 BS). He reportedly never sought a cabinet position while many of his peers and party men jostled for lucrative ministerial portfolios. If he had become a minister, he used to say, he would have lost his freedom, contravening to his way of leading a simple life.

Considered a treasure of commitment to his political and social beliefs, his views and actions distinguished him from the rest of his contemporaries. His love for books encouraged him to visit bookstores. He was born to an affluent family that was associated with the NC from the initial days of the grand old party of the country. The nephew of the then Congress politician, Rudra Prasad Giri, and son of Mitra Lal Giri, many of his peers praise him for being an open and high-minded leader who, however, led an assuming lifestyle.

The success of being a lawmaker and Congress leader did not bloat his ego. He donated his ancestral property to be converted into an ashram, which reinforced his reputation as a leader who cared about people and society.

During his political career, he worked closely with Congress veterans, Krishna Prasad Bhattarai and Ganesh Man Singh. His association with these prominent leaders, who too had led modest life both during their political heydays and during difficult times, must have left a deep influence on young Giri towards leading a life of a simple politician. As a well-aware leader, Siraha’s Bastipur-born Giri prioritised sharpening his political-philosophical vision and faculty rather than focussing on ascending political ranks through means fair and foul.

In the Nepali Congress circle, he is said to be the first among Congress leaders who raised the slogans to support Janjatis, women, Dalits, and Madhesis. Chosen as a member to draft the country’s federal democratic constitution that was promulgated in 2015, he maintained that strengthening the backward areas, classes and minorities, could bolster the federal democratic system.

His stature as a well-read yet a leader spending a prudent living spurred his contemporaries and senior leaders, media persons and those who knew him intimately to wax effusive about his prominence in politics and society. Upon his sad demise, many, including the President, party chairs, leaders of all hues, described him as a principled thinker and intelligent leader. For them, Nepal has lost a real and good leader with his passing. Some said that Giri provided a clear vision to political parties, leaders and policy makers for carrying the country ahead. He was also a socialist thinker, which made him a worthy politician to follow.

The Nepali Congress, in particular and other parties in general, will sorely miss his passion for carrying forward the democratic movement and his deep-rooted talent for party organisation. Giri, without doubt, created a niche for himself as a standard bearer of Nepali politics. His death has snatched a committed and visionary leader away from the country, where politicians with a wide range of knowledge on contemporary issues are rarely found.

After his demise, the Nepali Congress has indeed suffered an irreparable loss. For Congress, it will take years, if not eons, to get a leader of Giri’s stature, who could have inspired leaders and youths through his visionary ideas backed up by his vast knowledge, gleaned through years of poring over an eclectic mix of political, economic, socialist ideas and philosophy that have truly exalted him to a different level from the rest of politicians of our country.

(Upadhyay is Managing Editor of this daily.) 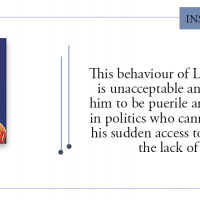