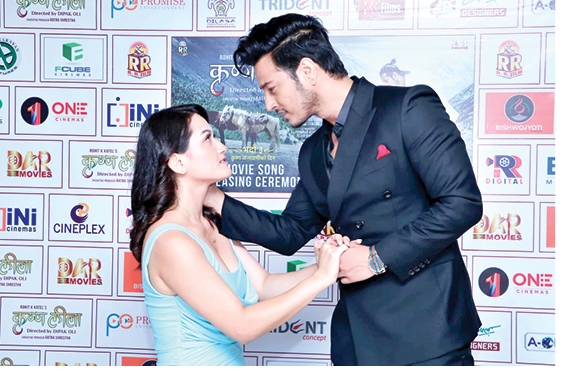 Kathmandu, Aug 15 : Krishna-Leela is going to be screened nationwide from August 19 on the occasion of Krishna Janmashtami.

As the release date approaches, the film unit is holding a concert in Chitwan to promote the film.

Director Deepak Oli has informed us that the team including the artists of Krishna Leela is going to hold a free concert at CG Landmark at 5 pm on Tuesday.

“Keeping in mind the demand of the audience of Chitwan, the first concert is going to be held there and we have a plan to hold concerts in other cities of the country as long as time is available,” Oli said.

The film unit expected thousands of audience will attend the concert.

The songs Tyo Kathama and Ye Mero Hajur from the film directed by Shiv Dhakal have already enticed the audience.

Presented by Rohit Kattel, the film is produced by Prakash Raj Karki and Kewal Tamang while Pitambar Acharya and Rojan Shrestha are co-producers of the movie.

Nepathya’s “Naina Taala”, a Dashain surprise for the fans