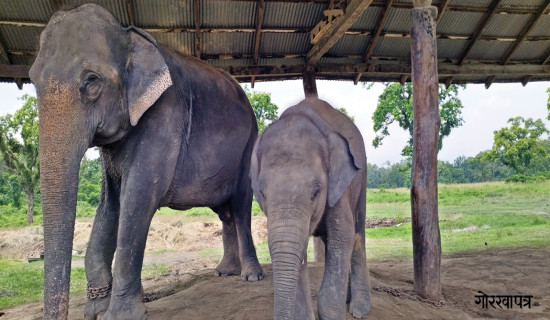 By Shaligram Nepal Chitwan, Aug. 15:Elephants raised privately in Sauraha of Chitwan have been sold out due to a lack of income and the resulting inability to feed them.

Deepak Bhattarai, president of the regional hotel association Sauraha, said there has been a 50 per cent decrease in the privately owned elephants in the last three years after tourists stopped coming because of COVID-19 pandemic.

Three years ago there were 65 elephants in the Sauraha area, but now there are only 32.

After being unable to feed them, desperate owners sold them to Indian customers. The sale of elephants has now been halted after a court decision that came at a time when 15 elephants were ready for sale.

Hotels and individuals raised elephants for tourism purposes. They take tourists to Tharu settlement by elephant safari. But for the last three years, the arrival of foreign tourists has virtually stopped, and fewer domestic tourists are enjoying the safari.

Jitu Tamang, president of Baghmara Intermediate Community Forest, said that due to the lack of tourists after the pandemic, the number of elephants going for a safari in the central area has substantially decreased.

Tourists go on jeep safaris inside the park and elephant safaris in the central community forest.

The government-raised elephants are used only for security and other government works.

Chief Conservation Officer of Chitwan National Park (CNP) Haribhadra Acharya said there are 61 government elephants and all of them are used for government work. They have been deployed for security at the park's security post.

Manrupan Chaudhary, head of elephant breeding centre Khorsor, informed that there are 22 elephants in the centre of Sauraha, 10 of which are calves and 12 adult elephants.

Two elephants are currently pregnant at the centre. Out of 10 calves, four are ready to receive training.

On the occasion of Elephant Day, private and government elephants were given food in Sauraha on Friday under the joint initiative of Chitwan tourism businessmen, conservationists, CNP, and United Elephant Cooperative Limited.