Coalition not only to win election: Minister Karki

Kavrepalanchowk, Aug. 9: Minister of Communication and Information Technology Gyanendra Bahadur Karki has said that the ruling alliance is not only for the party leaders to win elections but to guide the country towards stability and sustainable economic development.

Speaking at a press meet program by Nepal Press Union Kavrepalanchowk in Banepa today, he said after the formation of the alliance the constitution and democracy have been protected while the country has moved forward on the path of development and prosperity.

Also the spokesperson of the government, he said that the government was formed to give the country political stability, economic development and prosperity.  He said that the country has successfully held the local elections and is now moving towards the provincial and House of Representatives. Leader Karki expressed the belief that all the voters will be able to participate in the November 20 elections in a peaceful, fair and fearless manner just like in the local elections.

He also said that the Nepali Congress should be established as the leading party in the upcoming elections to realize the aspirations of the Nepali to become prosperous as envisioned by the Constitution. 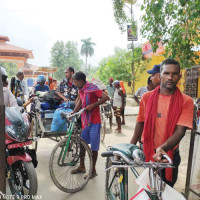