Garbage piles up in Kathmandu 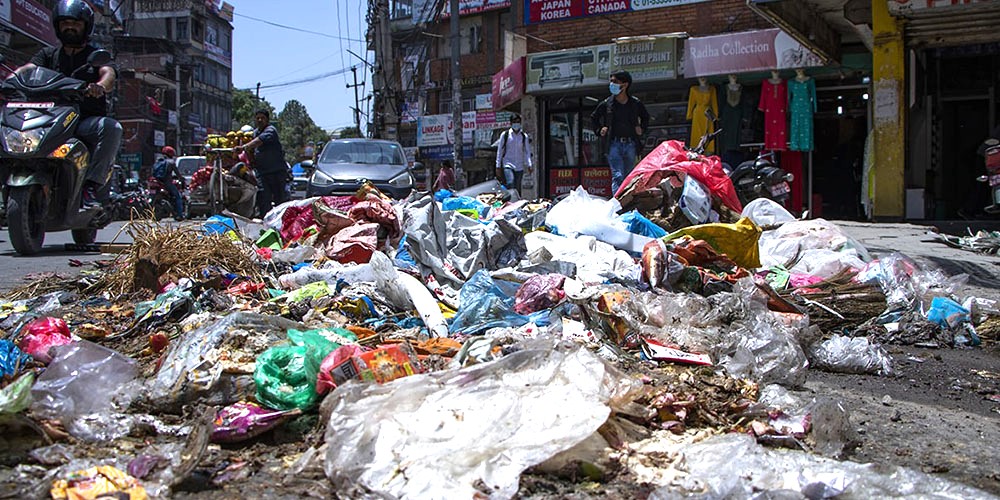 Kathmandu, Aug 6: Solid waste lying wet and stinking in various thoroughfares of the capital will continue to remain so for the next few days. Citing maintenance of the roads leading to the landfill site, Kathmandu Metropolitan City has not collected garbage for the past two months.

The road maintenance work leading from Sisdol to Bancharedanda has not been completed, the KMC has said. On July 20, the KMC had issued a public notice requesting the city dwellers not to dump garbage outside their homes for a week.

However, KMC spokesperson Naveen Manandhar said it will take some more time to complete the repair works of the road.

Meanwhile, the residents of Bancharedanda have warned of stopping waste management in their neighbourhood from the 17th of August, citing the failure of the KMC to fulfil the agreements reached with them.

The KMC dwellers produce 500 metric tons of garbage every day and about 75 per cent of the waste emitted from the valley is managed at Sisdole and Bancharedanda.

Commenting on the matter, Environmentalist Bhushan Tuladhar says that instead of blaming the KMC or people at the landfill site, every person should contribute to managing garbage starting from their kitchen. "Through the implementation of proper policies and planning, the city's waste can be managed sustainably and it should start from the kitchen ", said Tuladhar.(RSS)