Accord High Priority To Tourism 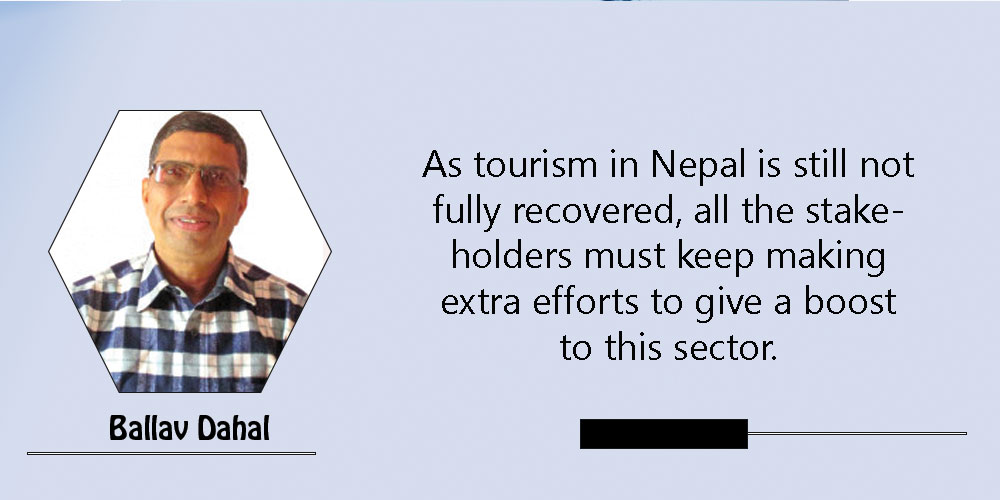 Tourism has been recognised globally as a key driver of economic growth, development of enterprises and creation of employment opportunities because of its multidimensional nature. Before the outbreak of COVID-19, tourism was one of the major sectors contributing to socio-economic development of many countries worldwide.  This business was the third-largest export sector after fuels and chemicals. It accounted for 7 per cent of global trade in 2019. Tourism’s contribution to the gross domestic product (GDP) of some vital tourist destinations stood at more than 20 per cent. This sector is believed to have contributed about 7.9 per cent to the GDP of Nepal prior to COVID-19.

But with the emergence of the pandemic at the end of 2019, the tourism industry kept suffering the most for 2020 and 2021 as all parts of its value-chain remained partially or fully disrupted. Being one of the most vulnerable sectors, tourism was the first to reel from problems after the outbreak of this global public health crisis, causing a loss to millions of jobs globally. Like most tourist destinations worldwide, Nepal also hit a snag with her ambitious national tourism campaign—Visit Nepal-2020-- as the pandemic began spreading throughout the world. With that campaign, the country had aimed at receiving as many as 2 million international travellers by 2020 and beyond. But the government was forced to cancel that year-round event with many tourist generating nations imposing travel bans and other restrictions to tackle the deadly virus disease.

This ‘smokeless’ industry has also become the last among all sectors of global economy to recover. Tourism has started reviving gradually only since the beginning of 2022. A glimmer of hope has now been created among global tourism stakeholders along with increased international tourist arrivals. Being an alluring destination for travellers from different age-groups with varied tastes and interests, Nepal has also recorded a steady revival of tourism activities in recent months. The country is expected to welcome more foreign tourists this autumn. Major hotels located in important destinations like Kathmandu, Chitwan, Pokhara and Lumbini have received promising bookings for the next couple of weeks. It shows that lots of tourism-related jobs are being restored gradually.

With the start of autumn, popular trekking regions such as Annapurna and Khumbu have already begun hosting a lot of foreign as well as domestic trekkers and adventurers. Nepal is famous for her unparalleled topographical variations, scenic beauty, and cultural multiplicity. What is equally popular among visiting tourists is the unique Nepali hospitality.

As of now, the Department of Tourism (DoT) has issued permits to nearly 950 climbers from 68 various nations from around the world. They have initiated the process of attempting different mountains, including Sagarmatha, Mt. Dhaulagiri and Mt. Manaslu, for this season. Many of expeditions to Mt. Manaslu have almost completed their bids. The country has earned millions of rupees only in permit fees. Tourism activities directly or indirectly support many other auxiliary sectors like handicraft, agriculture, livestock farming, transportation, bee keeping, among others.

However, hundreds of tourists had to get stranded in the Annapurna Region and some other destinations a couple of days ago because of incessant rains. Rain-induced disasters such as flash floods and landslides damaged roads, bridges and other infrastructures, causing a lot of inconvenience and insecurity to tourists as well as support staff members like guides, porters and cooks. Although rescue teams were deployed by the government and the private sector at those unsafe places, rescue operations were not carried out in a smooth manner. Unpredictable weather conditions and difficult mountainous topography were responsible for the failure on the part of responsible authorities to take tourists to safer places on time.

The delayed rescue operations are a clear indication that the country still does not have a sound rescue mechanism and a reliable weather forecasting system to deal with such emergencies. Learning from such a situation, the government must work on developing a strong and reliable rescue facility with efficient human resources and innovative technology. There should be proper coordination and collaboration among the three-tier of governments to ensure prompt rescue and rehabilitation. The availability of such services alone can help enhance the confidence of tourists as well as tourism entrepreneurs.

Another problem hitting tourism growth has been the continuous spread of the dengue infection. Tourism entrepreneurs say that the country might have been able to attract many more foreign tourists this autumn had necessary efforts made to bring the dengue infections under control. It seems that the initiative to contain this mosquito-borne viral disease has been in the shadow of political agenda, especially the upcoming elections. As travellers are very much concerned about their health safety, it is natural for them to postpone their trips to the countries where contagious diseases are being spread.

As tourism in Nepal is still not fully recovered, all the stakeholders must keep making extra efforts to give a boost to this sector. Many tourism enterprises are in dire need of relief packages, including soft loans, to sustain their business in such a challenging situation. But such facilities are not available. The Ministry of Culture, Tourism and Civil Aviation (MoCTCA) had come up with a 73-point tourism action plan about two and a half months back in order to facilitate the revival of the nation’s tourism industry. The action plan appears to have been limited to the document alone as it has yet to be implemented properly. Tourism must be treated as a high priority sector in view of its contribution to our national economy. It must be acknowledged that the country’s ailing tourism sector cannot bounce back without having a tourism-friendly policies and efficient and honest administration.