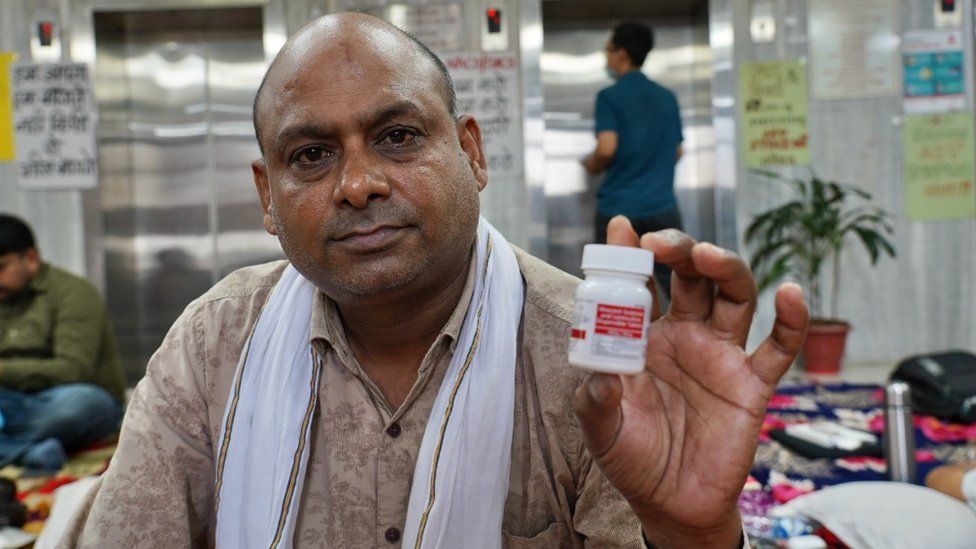 ANSHUL VERMA/BBC, Jaiprakash says he is eating 11 low-dosage tablets a day instead of two

By Sharanya Hrishikesh, Aug. 13: For more than three weeks, Jaiprakash, who lives in India's capital, Delhi, has been taking 11 tablets a day instead of the two he is supposed to take.

The reason, the 44-year-old says, is that he is unable to access the right dosage of the combination medicine prescribed to him for HIV. So, he has found a temporary workaround - he ingests additional pills from a bottle of lower dosage tablets usually given to children.

Jaiprakash is among hundreds of thousands of Indians living with HIV who depend on free medicines provided by the government through anti-retroviral therapy (ART) centres across the country.

For weeks, he and other members of an HIV activist group have been protesting in front of the Delhi office of the National Aids Control Organisation (Naco) - the federal agency that procures drugs from pharmaceutical firms by issuing tenders. They allege that there is a critical shortage of essential drugs, including Dolutegravir 50mg - which Naco has recommended as "the preferred drug for all lines of treatment of HIV infection".

These medicines have to be taken daily - experts say a treatment interruption can cause a person's viral load to rise, heighten risks of HIV transmission and drug resistance, and make them more vulnerable to secondary infections such as tuberculosis. While the drugs are available at private medical shops, many are unable to afford them.

Hari Shanker Singh, one of the protesters, says that earlier, ART centres used to give medicines for at least a month.

"But over the past few months, we started getting reports from our members in various states that they were receiving medicines for only a couple of weeks. Then that time period also began getting shorter," he alleges, adding that this is hard on people who can't afford to travel to ART centres every few days.

India's health ministry - which Naco reports to - has denied the allegations.

"There is no stock-out of drugs and there are no instances of disruptions or non-availability of treatment services or ARV medicines at the national and state levels," the ministry said in response to the BBC's questions.

Activists allege that the current disruption arose because the tender was issued late and that the process was delayed further because the "shortlisted bidder was found to be blacklisted".

The health ministry didn't respond specifically to the BBC's query on this allegation but said that "fresh supply orders for the next lot of several drugs" have been given, and that it expected to receive supplies before the current stock run out.

India has the world's third-largest number of people living with HIV (PLHIV), at around 2.3 million. The country started providing free anti-retroviral drugs in 2004 - initially for first-line treatment and then scaling up gradually over the years.

This was three years after Indian pharma major Cipla started producing a generic version of the highly expensive cocktail of three drugs that were, until then, manufactured by multinational companies.

Before that, says activist Loon Gangte, the cost of medicines for a patient was $12,000 (£9,800) per year and "neither governments nor ordinary people could afford it".

Cipla's gamble brought costs down to $350 per year - since then, India has become one of the biggest suppliers of affordable HIV medicines to many developing countries, especially in Africa.

But activists say many can't even afford this price, which is why the government's free drugs programme is crucial.

The health ministry said that Naco closely monitors the stock status of anti-retroviral medicines and has reviewed the current situation. It also reiterated its earlier statement that there was enough stock of the TLD tablet - the single generic HIV combination drug taken by 85% of patients - to last three months.

"Also, there is adequate stock nationally for around 95% patients in India who are on various 1st and 2nd-line [anti-retroviral] regimens," it added.

But Manoj Pardeshi, who works with another PLHIV group, says that even if one person is not able to access life-saving medicines, it is unacceptable.

"Many have been asked to purchase their medicines from chemists," he says, adding that the problem is mainly being faced by people who are not on the TLD regimen and children who need paediatric medicines.

Dr Ishwar Gilada, who started India's first Aids clinic in 1986, says while an interruption of 15-20 days may not be that damaging, the current supply disruption is concerning as it has been going on for a couple of months.

"Once supply resumes, there will be chances of people developing drug resistance if they are unable to regularly access the combination of three medicines they have to take," he says, pointing out that India doesn't do resistance testing to identify whether a patient has stopped responding to certain drugs.

"Apart from this, it also affects the faith of people. The onus shouldn't be on the patient to find the drugs," he adds.

This isn't the first time alleged supply disruptions have interrupted access to HIV drugs - patients went through a crisis in 2014. There have been other instances over the years too.

Dr Gilada blames a "tedious" procurement process that offers little incentive to companies to participate, especially when margins are low.

"India has come a long way in tackling HIV over the past few decades. If it weren't for India, the global situation would also have worsened," he says.