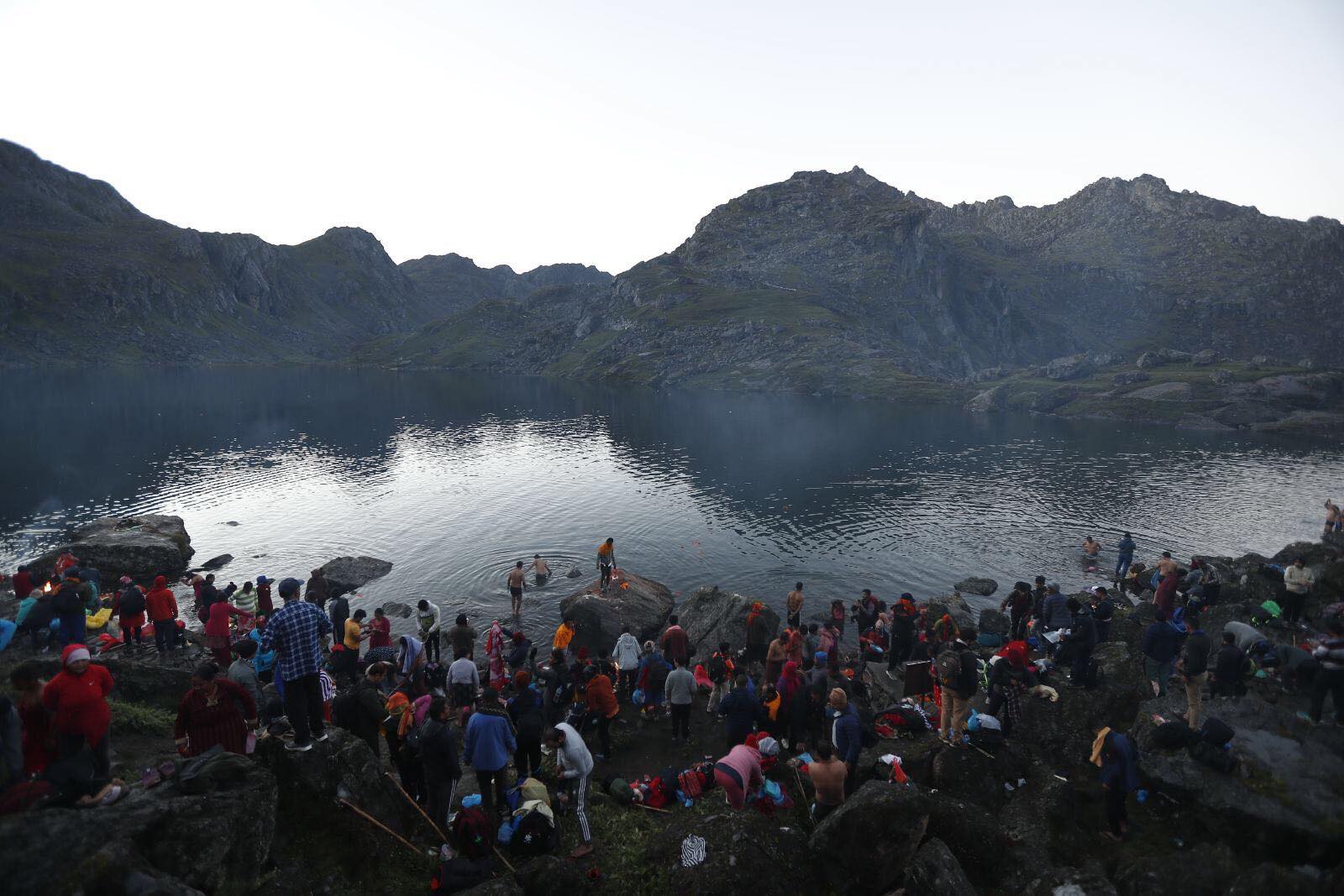 By Sanu Kanchha Lopchan, Rasuwa, Aug. 13: Thousands of devotees came to Gosaikunda on the day of Janai Purnima on Friday to take a bath in the lake’s water.

According to Sanjeev DM, chairman of the Gosaikunda Area Development Committee, around 10,000 bathed in the holy water body on Friday, motivated by the popular belief that taking a dip here cleanses a person of all their sins, liberates the souls of their ancestors and gets their wishes fulfilled.

DM informed that the Nepali Army, Armed Police Force, Nepal Police, Langtang National Park officials and local youths were mobilised to help the pilgrims and prevent unpleasant incidents. Similarly, mobile health teams were stationed at Gosaikunda and Chyolangpati to look after the health of the arriving people and provide health and safety consultations.

Gosaikunda is a famous pilgrimage site located at an altitude of 4,380 metres above sea level in Gosaikunda Rural Municipality–5. It lies within the Langtang National Park and attracts the largest crowds in the Nepali month of Shrawan.

For about two weeks, from the day of Nag Panchami to Janai Purnima, a grand fair is held on the shores of the lake which is attended by people from all over the country. Gosaikunda is a sacred site for both Hindus and Buddhists.

The Gosaikunda Lake is believed to have been formed from the water that flowed from the side of a mountain when God Shiva (Gosai Baba) hit it with his trident. According to Hindu mythology, Shiva is supposed to have drunk the poison that came out during the great churning of the ocean (Samudra Manthan). The poison burned his throat and he came to the Himalayas seeking water to cool it. When he did not find it, he hit a mountain with his trident and water (Ganga Jal) flowed from it and collected in a pool that became Gosaikunda.

In addition to Janai Purnima, worshippers also gather at the lake on the day of Ganga Dasahara.

It is believed that there are 108 ponds and lakes in the area, with the major ones being Gosaikunda, Bhairav Kunda, Ama Kunda, Surya Kunda, Saraswoti Kunda, Rakta Kunda, Chandra Kunda, Dudh Kunda and Nau Kunda. The government declared the whole site a wetland in 2007.