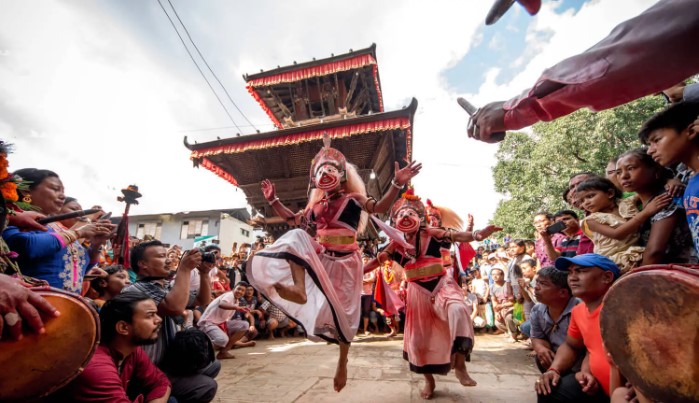 BY A STAFF REPORTER, Kathmandu, Aug 9 : As only four days are left to start Gai Jatra, a festival of dance, satire, and music, the Thimi locals are now preparing to offer a parade of traditional street dances. Every year, the streets of the ancient city of Bhaktapur are flooded with dances of different kinds with the starting of Gai Jatra.

The dancers (Devgan) of the Tha Shrestha of Bode have started rehearsing Nil Barahi Dance, which is performed for four days after the Gai Jatra from Krishna Dwitiya to Panchami.

Prem Chandra Aduwa Shrestha is the main dancer of the Nil Barahi dance. At the age of 71, he is preparing to perform the dance for the 64th time this year. The septuagenarian dancer said they would rehearse for four days.

There are 19 Devgan's associated with the Nil Barahi Dance. Of them, one performs as Bhairav, four as Nil Barahi, four as Kumari, four as Ganesh, four as Singh, and two as Drupal.

He said the dancers should dance 12 to 14 hours a day once it starts in the narrow alley of Bode. They are not allowed to take food, drink water and talk with anyone or take a rest during the whole performance.

When one chooses to become a dancer, he should dance no matter what happens in their life even while losing his parents and another family member.

It is believed that Nil Barahi herself appeared in front of the locals of the Bode and taught them the current dance style. After that, locals started performing the dance. So, it is said that the historical and cultural Nil Barahi dance has been in place since ancient times.

The dance begins and ends at Akha, the sacred spot in Lachhi near the Bode Narayan Temple. The dancers go around several religious shrines located in the Lachhi Tole, Bishnughat Tole, Bhagu Tole, Khasi Tole, and the Layaku area.

The performers of the tantric dance are called Devgans (God’s people). Eight of the 19 Devgans are now in their late 70s, having to dance in old age because the youngsters are not interested in partaking in the ritual ballet.

Shrestha said that “Each dancer puts in Rs. 50,000 from their own pockets to conduct the dance.”

However, the Madhyapur Thimi Municipality provides Rs. 300,000 every year but it is nowhere near enough. The Nil Barahi Dance Guthi has been continuing the dance with great difficulty and cannot give anything to the dancers for their efforts, he added.

It is believed that the dance was started by King Subarna Malla around 1511 AD (Nepal Sambat 631) and used to be performed by members of the Tha Shrestha community of Bode. However, for the past 44 years, it has been performed by the Aduwa Shrestha of Lachhi Tole.