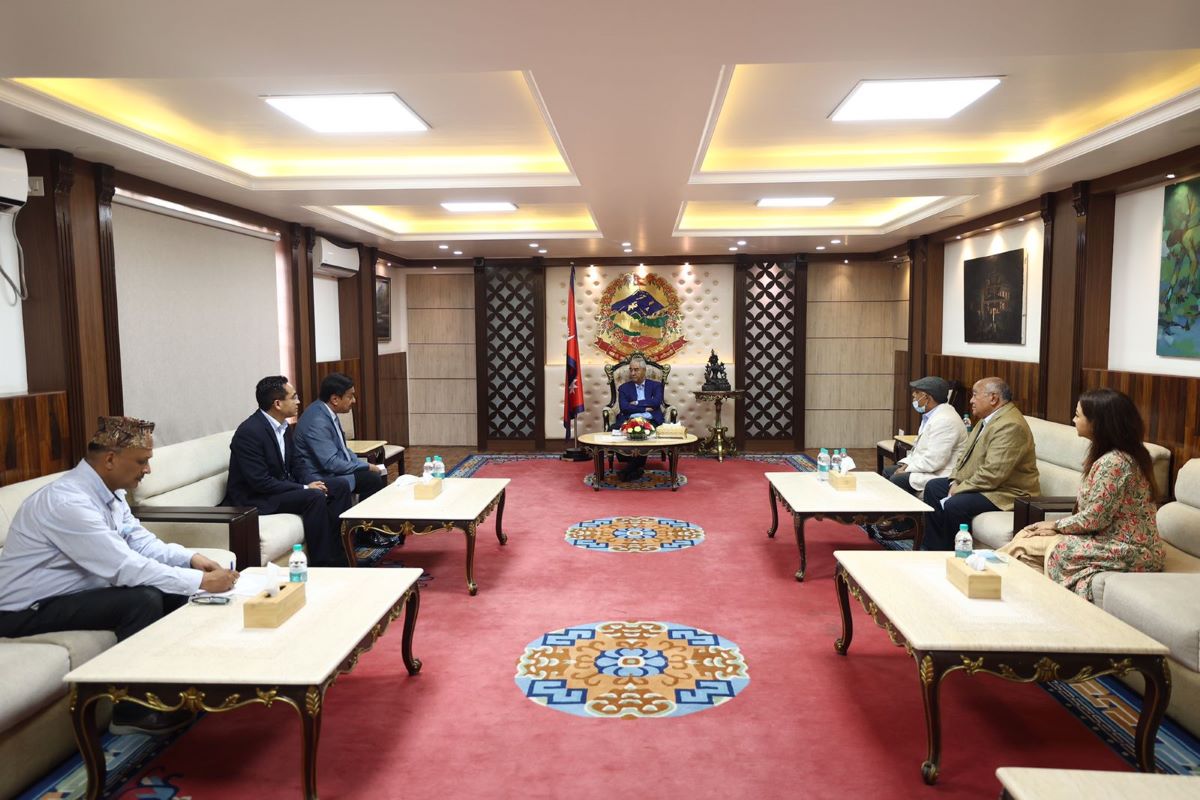 By TRN Online, Kathmandu, Aug 7:  A delegation of the Nepal-United States of America (USA) Chamber of Commerce & Industry (NUSACCI) has held a meeting with Prime Minister Sher Bahadur Deuba and discussed the ways to boost the export of Nepali products to the USA.

An NUSACCI delegation led by President Kiran P. Saakha paid a courtesy call to PM Deuba at his residence in Baluwatar on Saturday and expressed their motivation to strengthen the trade and investment between the two countries, according to the press release issued by the NUSACCI.

Basically, the courtesy call was meant to be for introducing newly elected NUSACCI executive board members and briefing on NUSACCI activities as well as various issues related to Nepal-USA trade and investment.

"Saakha extended sincere thanks and gratitude to Prime Minister for giving his valuable time to meet the NUSACCI delegation. The meeting began with the introduction of the NUSACCI delegation. Saakha, briefed that NUSACCI as a bilateral chamber over 28 years of existence and the role played by NUSACCI for strengthening bilateral ties between two countries in the areas of trade and investment and its stance on early ratification of MCC by parliament".

The USA is one of the major trading partners of Nepal. For a couple of years, Nepal’s trade balance with the USA was in a deficit position. In the FY 2021/22, in terms of export and import in trade in goods, USA position is 2nd and 5th respectively. The major share of Nepal export to the USA comprises carpets followed by felt and cat and dog food. In view of this, the delegation urged that there is an urgent need for the promotion of carpets, readymade garments and pashmina. In the past, these were major items exported to the USA and regarded as a major source of foreign currency. Saakha emphasized that NUSACCI is always ready to collaborate with GON for promotional activities for boosting export to the USA. Another major issue discussed is the Trade and Investment Framework Agreement (TIFA) with the USA done in 2011 under which there is a provision of technical assistance and the private sector is not getting the benefit as envisaged in the agreement, read the press release.

Nepal is enjoying duty-free entry of Nepali goods to the USA in 77 items. In fact, 5 items categorically cover 77 different HS code items. Few major exportable items fall under this facility like carpet and pashmina. It is a great opportunity for Nepal to export these products in a significant way. Other topics discussed during the courtesy visit are the importance of compensation law, Intellectual Property Right (IPR), attracting American investment in the Hydropower Sector, and export promotional activities in collaboration with GON for boosting export to the USA, according to the press release.