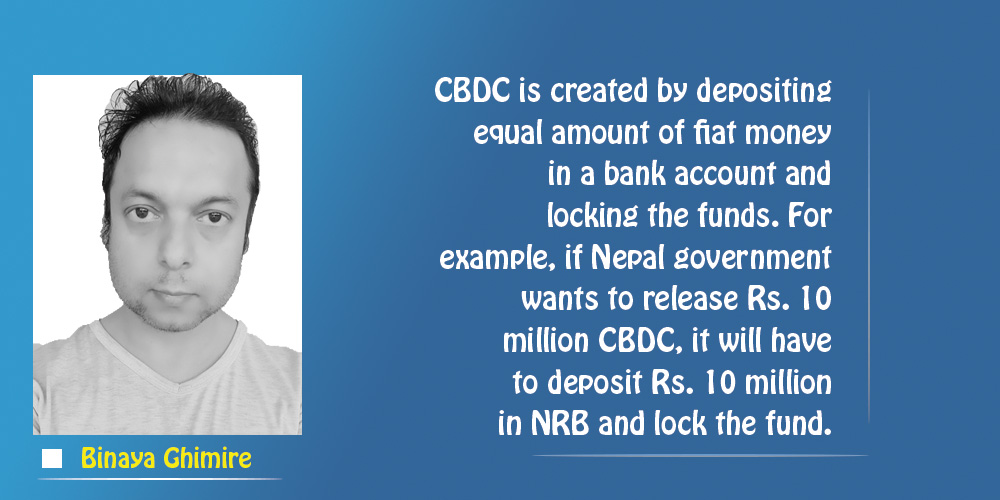 Fiat money can be sent and transacted digitally. For instance, you can use card payment or mobile payment wallet, or QR Code payment. None of these transactions use physical money. You use virtual money (or digital money for transaction). Cryptocurrencies, on the other hand, do not have any physical existence.

They are created and transacted digitally and exist only in the

In recent times, central banks in various countries are also trying to create their own digital currency and they are calling it CBDC. Countries like India, the US, and the UK are attempting to launch their own CBDC. China has been using CBDC for some time. They call it Digital Yuan.

One of the major attractions towards Bitcoin and all other cryptocurrencies is their decentralised nature. Cryptocurrency is completely driven by the demand and supply in the market. However, there is also a major danger associated with cryptocurrencies.

Decentralisation poses a great market risk, that’s why the value of cryptocurrencies fluctuates too much. For example, in November last year, Bitcoin’s value was $69,000, it currently stands at $32,000. In the absence of central authority, cryptocurrencies also possess financial loss risk as some crypto project can run away with the investors’ money.

People are interested to transact with cryptocurrencies because of anonymity attached with the transaction. When one uses traditional financial system, s/he will not only have to give your identity but also show the source of money for large transactions. However, when someone sends Bitcoin, s/he can do it anonymously. The transactions are recorded on the bockchain but the transaction does not show the sender and receiver.

This feature of cryptocurrency is a great threat for the traditional financial system because things like money laundering, buying illegal items and funding criminal activities can become easy with anonymous transactions with cryptocurrency.

CBDC is a centralised digital currency for it is controlled by central banks and the government controls the central banks. CBDC is an answer to the decentralised money and the risk associated with it.

Cryptocurrency is decentralised and it is not controlled by individuals or institutions but by the public who have invested in the currencies. CBDC is just the digital version of fiat currency.

CBDC will be pegged as 1:1 value, for example, if Nepal launches CBDC,

the value of 1 CBDC will be exactly 1 rupee.

So, how does this actually happen. CBDC is created by depositing equal amount of fiat money in a bank account and locking the funds. For example, if Nepal government wants to release Rs. 10 million CBDC, it will have to deposit Rs. 10 million in NRB and lock the fund.

One needs to understand one basic thing about CBDC. CBDC is a digital version of the fiat currency that will eliminate the use of physical money and makes digital transaction easy and smooth. Digital transaction will also help the government to track all financial transactions.

Therefore, there will be minimal chances of illegal activities. CBDC will eliminate the necessity of physically moving banknotes from one location to another.

Paper money will not be used for sending and receiving funds because there will be CBDC in operation. So, the life of paper money will also be higher.

(Ghimire is a freelance writer.)